Egypt: A Land of Fairy Tales stemming from the history itself and stories that have survived the test of time. But what is unraveling right now? While your patiently waiting to see the movie, I thought you might like to know what happened on the way to making it.

Without giving away the whole movie, I want to share the adventure of simply seeking tales meant just for you.

One day, this past fall I was networking to bring in new stories and suddenly quite inexplicably I was sought out by someone else. Someone who just like us, believes that Fairy Tales are still accessible.

At first I thought this can't be real. And then everyone warns you to tread with caution it's a foreign country...Haven't you read the news? Then they forward you the news and it's not even in the place your going. So I took a deep breath and followed my intuition. I checked it all out, it's an unexpected opportunity to meet new people and so of course the thrill of adventure overrides any fears. After all, if I get there and it doesn't feel right, I can always go sightseeing and find a hotel on my own. If I didn't do it - then I would have to stare at and listen repeatedly to that "What if" question. Quite possibly nagging me for decades!

Happily, that wasn't the case. I arrived and Mr.Hafez, a true gentleman and my new quest partner on this trip proved to be up to the challenge of unraveling Fairy Tales in Real-Time, Rather than once upon a time.

Travel documentaries take you to all those beautiful sight's and tell you about the history. Yet, it is not nearly enough. When traveling to a different part of the world; I want all of that and more! I want to know about the people I am going to encounter along the way, are they nice, helpful - what is their life like? These are all the things we are going to bring you.

Getting ready to go? I learned a long time ago to pack like the Military aka the 'Ranger Roll' it will give you lots of extra space to bring home souvenirs. I found the absolute best place in Giza to shop for souvenirs it's in front of the Sphinx kinda down the street and around the corner; but, it is so worth the visit! Tell them Fairy Tale Access sent you. It is a lot different than the high pressure selling you'll find in the streets and the family has been there for over 40 years!

Everyone I worked with was wary of going or not sure yet. So I went alone.  What could go wrong? Precautions when traveling alone male or female, I left my schedule and flight plans with my family, station manger and a friend just in case.  In the States and other countries when traveling to foreign countries it's smart to enroll your trip with your Secretary of State, Dept. of State or Consumer Affairs.  In the United States it's called the "Smart Traveler Enrollment" that way if there is a development in the country your visiting, the embassy will notify you and then you call your insurance company and they will get you out.

It's a long flight but Turkish Airlines offered a great connection that made it only 14 and a half hours from Boston, MA with less than a 2 hour layover in Istanbul, Turkey - to change planes (just enough time for a coffee and boarding). Tip: Book a limo and check around for prices you do not want to drive out of Boston or any airport after the flight back.

Tip: when having coffee in the airport in Egypt or Turkey do not get caught up in the female announcers boarding calls for exotic locations like Casablanca. If you saw the movie (I only saw it a dozen times) your apt to start day dreaming. I did, imagining new adventures, like I could just go on to Casablanca for a few days ... and then jumped out of my seat when I realized they were announcing my flight.

In the search for an online travel provider & the best price, I checked them all and then I checked their reviews. I was surprised that places like Orbitz didn't fair as well as Just Fly for example. After reading the reviews & based on other  travelers experiences, I went with Just Fly.  It was simple, fast and the least expensive at the time I finalized plans to go ... about two weeks before (it's still less expensive to travel on Tuesday or Wednesday).  Booking two months in advance is outstanding.

Flight insurance great - but check the fine writing specifically for the things they do not cover.  It is good to have because you'll find a lot of health insurance coverage's in the states will not cover you overseas.  The catch is they will only cover you if you go to an emergency room. Call and Check before you leave.  PS. prescriptions are easy to replace in Egypt they seem to have pharmacy's everywhere.

My hotels were taken care of this trip. But a great place to visit and relax after trekking to historical sites is Ain Sokhna, Egypt; the red sea and it's inviting calm blue beach will keep you relaxed and revive you for your next adventure! 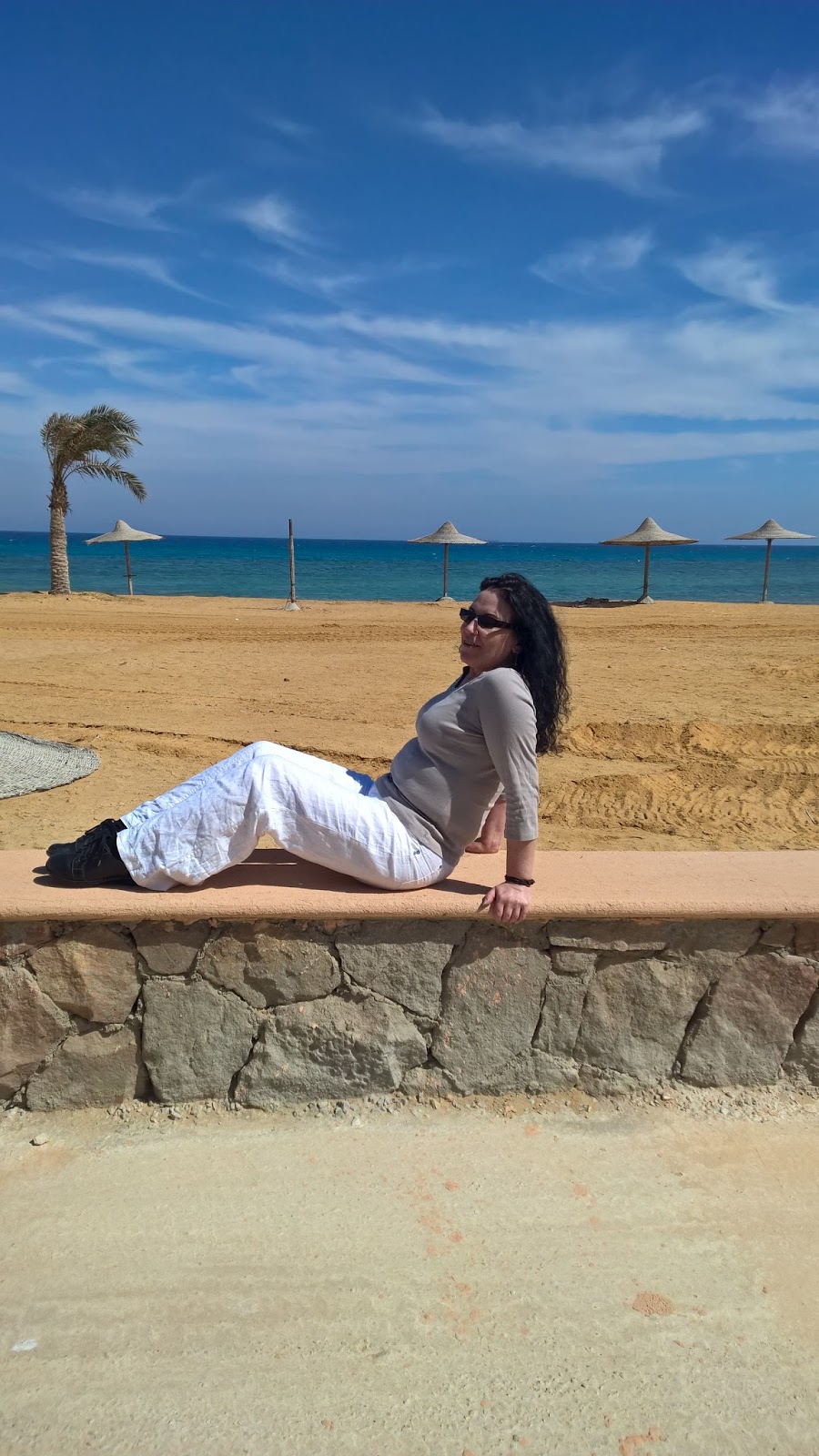 Tourist Visa's, mine was easy.  Pick up at the airport $25.00 albeit all good things come to an end on 5/15/15 ; but you can still get them in about 10 - 14 days from the Egyptian Embassy nearest you by mailing it in. UPDATE Egypt retracted their decision and will still have them at the airport but for 30 days and they are working on an electronic system.  Fantastic!

Solo Travelers tend to be adopted by families and other solo travelers along the way which is really helpful in the transfer airport, especially in Turkey it's huge!!! You could easily get lured into any number of specialty duty free shops and miss your flights. Make sure you know where your going. The shops personnel are much more helpful over the airport personnel who are ... okay, they were just not helpful at all. Which was a bit of shock considering that the flight attendants from the same country went out of their way to ensure you had anything you wanted at anytime while you were on board.

Once you get into Egypt it appears at first glance that you have entered chaos's realm.  But as you move into the security area just remember to look for the bank 1st and get your visa before you go through security; it's a bit of a wait and you do not want to do it twice.

You will find the people of Egypt to be friendly, knowledgeable and willing to answer any questions you have. Honestly, everywhere they were lovely and kind. Even in a mosque without my hair covered another woman who didn't speak English saw that I wanted to fit in and helped me do just that. Simple eye contact and a smile and the world will share all of it's secrets with you - she even helped me take pictures! 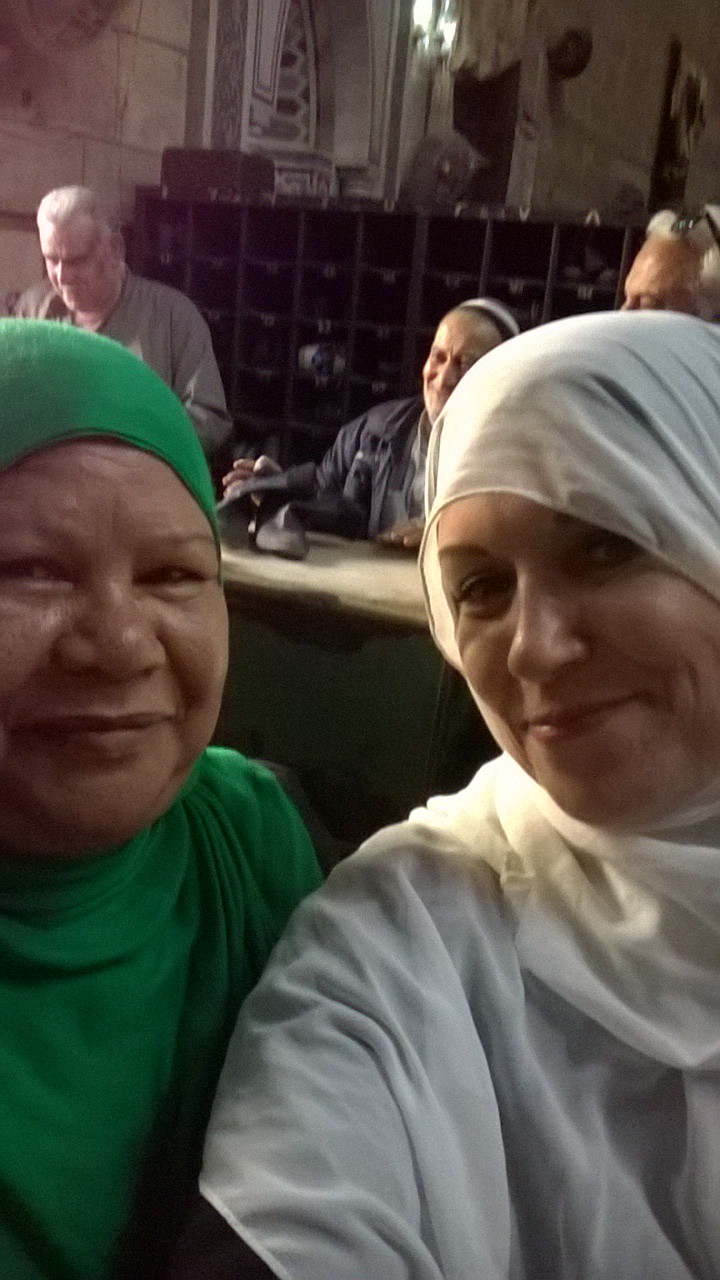 At the airport, I found people or rather they found me and were willing to carry my luggage. If you allow it, they are going to expect to be tipped.  A couple of euro's or dollars is satisfactory. So just hand them that - when they ask for $20 and say thank you.

Thank you, which is Shukraan. A word that I kind of didn't get until a young man of 9 and his sister 12 painfully (for them) explained it to me at least ten times. It sounded more like Chocolate with a R to me, but it's not, it's Shoo-Kran.

A lot W.C.'s (bathrooms) had toilet paper and many did not. So it is advisable to pack a lot of cute small packs of tissues, napkins are not given out a lot either so they came in very handy! Alas, if you forget they are sold on the side of the road in varying sizes everywhere in Cairo.

Bring lot's of dollars or euros for tipping the person who watches your shoes, helps with luggage or for the W.C. the people who keep the rest rooms clean are truly saints.

Last Tip: otherwise I will go on and on and give it all away before you actually see the show!  Stay away from any protests or developments. Remember what my mother told me growing up "Do not talk about your views on politics, religion and/or how much money a person makes. But do listen, learn and ask clarifying questions." Live the Fairy Tale Adventure meet new people and do not let anyone talk you out of going.

You took all the precautions, therefore Karma is going to be on your side and it's going to be a wicked adventure!

psst. you can go to Twitter  or FaceBook I tend to scatter clues around about these things...don't tell Mr. Hafez, he can be a rather serious person about keeping things under rap until it's done, take a peek he's not uttering a tweet, he's in editing though...

Email ThisBlogThis!Share to TwitterShare to FacebookShare to Pinterest
Labels: Discovering, Egypt, The How

Our Families Are Different

Nelson Mandela, once said; "Education is the most powerful weapon which you can use to change the world."

If we take the time to understand others and are simply okay with the differences; imagine the beauty
we'll find wherever we go!

For More Information on this Author click here: it also has a couple of corrections. Keep Reading!